At Hyperfine, our animation work is typically produced with the aim of communicating key facts and messages about businesses or organisations. But recently we took on a very different project – creating a series of ‘sharp, accessible and engaging’ 60-second infographics for the BBC website. This project flexed our creative muscles and proved to be incredibly rewarding, so we thought we would share some insight into the production process and how some of the things we learnt could translate into our day-to-day work for our clients.

‘We were really impressed with how Hyperfine embraced the iWonder mission to inspire curiosity. Their ideas were creative and original and the final videos were just as the brief asked – sharp, accessible and engaging.’
Jeremy Torrance BBC iWonder producer

BBC Learning were looking for a series of standalone, short form animated infographics for the digital factual and educational brand iWonder. These infographics were to be data-driven and communicate big ideas backed up by fascinating facts and figures. There was a wide scope and flexibility for the topics – covering genres as broad as history, technology, science, arts and sport. The only caveat was that the topics had to ‘put the user at the heart of the story’ – which we read to mean strike a chord with the viewer and pique their curiosity about their lives and the world around us. And the animations had to be thought-provoking enough to start conversations and encourage sharing on social media.

Research & Scripting:
The BBC iWonder website provides a wealth of fascinating interactive guides each built around a thought-provoking question. We pitched dozens of ideas along these lines. These included questions about our very existence – such as ‘What are we made of?’; questions about our impact on the environment – ‘How green is your commute?’; questions about the impact of technology on our lives – ‘How powerful is your smartphone?’; and many others. We found the most successful ideas were those that had a simple, powerful narrative idea running through them – such as ‘Could I live on another planet?’

It was easy enough to research these topics – the internet has made masses of previously hard-to-access data available to all, from NASA technical information to government statistics on meat consumption. The challenge was in distilling this research into scripts that were ‘sharp, accessible and engaging’ – a 60 second video moves surprisingly quickly. It took some trial and error but over the course of the project we learnt how much data to include to communicate the key points.

Design & Storyboard
We had the BBC iWonder brand guidelines to adhere to, such as using a limited colour palette of blues and greens, but beyond this there was some flexibility to define the look and feel of the videos. The main challenge was deciding what visual techniques to use to communicate the data for each video. We wanted to avoid any of the minute-long animations being stuffed with pie charts and bullet points. The concepts we had to communicate ranged from mind-blowing distances across space to far more everyday experiences around sports results or water usage. We used dozens of different visual styles to communicate these ideas as shown in this montage:

Illustration & Animation
Our team worked with various designers in Adobe Illustrator to create the design assets to use as the building blocks for the animations– typically several characters, vehicles, buildings, or other objects on each sheet in a consistent style. The bulk of the animation was produced in After Effects, with some 3D elements such as spacecraft and smartphones added via Cinema4D. In many ways the animation stage was the most straightforward but also the most time-consuming. We found that we often had to modify the layout even at this late stage as sometimes what worked well as a static image could be too lifeless or too busy in an animation.

In total we produced 23 60-second animations for the series, as well as shorter 30-second versions for Facebook and 15-second versions for Instagram – these shorter versions focussing on just one key idea from the full video. The BBC were supportive throughout, helping us to refine the ideas and make sure we kept ‘provocative, curiosity-inspiring questions’ front and centre. Now that the animations are being published across the iWonder platforms it’s great to see these being embraced and shared by an audience – to take one example, our infographic about the changing day length was viewed 70,000 times within 24 hours on Facebook . 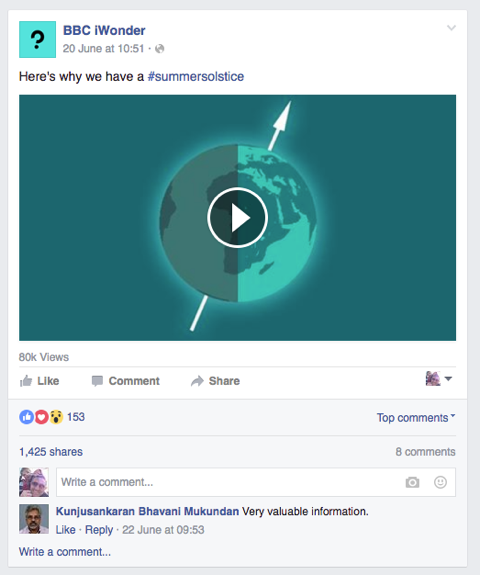 Overall it’s been a refreshing change to work on a project with no other remit than to inspire curiosity, and we’re keen to see some of the lessons we learnt carry across to our day-to-day work with clients – you can read more of our thoughts on this here.